Just a reminder that you can still go back and listen to the November 5th edition of Art Scene and Heard -- download or stream it from the CKUT archives.

We featured an interview with Bambitchell, the multidisciplinary collaborative art duo of Alexis Mitchell and Sharlene Bamboat, who recently brought their participatory installation Silent Citizen to articule. We also aired an excerpt of a discussion the artists participated in at the gallery with Nazik Dakkach.
Posted by Out of Lines at 19:20 No comments:

Recently I visited the exhibition up at Galerie René Blouin with David Lafrance - tune in to CKUT today to hear his musings on the paintings of Anthony Burnham, Chris Kline, and Nicolas Lachance. We'll also hear about David's own work. En français!


Also, this evening a show called Touché par la lumière: peinture et métaphysique opens at the McClure gallery. Curated by David Elliott, it brings together the work of Matthieu Bouchard, Bea Parsons, Ludovic Cléroux, and Allison Katz. Listen in for the wee chat I had with Matthieu about the exhibition. En anglais!

If you can't catch it live, download it from the archives.
Posted by Out of Lines at 10:20 No comments: 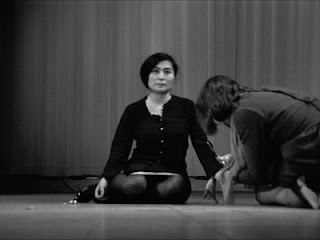 Listen in to CKUT today for the July edition of ASAH.

Michael Williams is a New York-based painter who has an exhibition up at the Montreal Museum of Fine Arts: Yard Salsa is a collection of large-scale works in which the digital collides with the painterly.

I spoke with Michael on the eve of the show's opening, so we'll here our chat.

Also on the program today: Naum Gabo and The Realistic Manifesto. And more!
Posted by Out of Lines at 12:44 No comments:

While the blog lay dormant, Art Scene and Heard has continued to air monthly on CKUT 90.3FM. Since April of this year, the program expanded to a duration 1 hour.

A few highlights from the past few months of broadcasts:

In December, we aired a lecture given by photographer Jamel Shabazz at McGill University earlier in the fall.

In March, we dug up interviews from around the web: one with painter Kerry James Marshall and another with photographer Benoit Aquin.

In April, we had artists Edith Brunette and François Lemieux live in studio to discuss their exhibition Cuts Make the Country Better.

In May, we heard an archival recording of Georg Baselitz performing The Painter's Equipment.

In June, we played an interview I recorded with artists Bismark Villacrés and Danielle Matte, participants in cultural mediation project Tandem Créatif.